Gary Gygax on The Campaign

From the 1e AD&D DMG. The original advice, still the best.

Unlike most games, AD&D is an ongoing collection of episode adventures,

each of which constitutes a session of play. You, as the Dungeon Master, are

about to embark on a new career, that of universe maker. You will order the

universe and direct the activities in each game, becoming one of the elite group

of campaign referees referred to as DMs in the vernacular of AD&D. What lies

ahead will require the use of all of your skill, put a strain on your imagination,

bring your creativity to the fore, test your patience, and exhaust your free time.

Being a DM is no matter to be taken lightly!

Your campaign requires the above from you, and participation by your players.

To belabor an old saw, Rome wasn’t built in a day. You are probably just

learning, so take small steps at first. The milieu for initial adventures should be

available time as compared with the demands of the players. This will

typically result in your giving them a brief background, placing them in a

settlement, and stating that they should prepare themselves to find and

explore the dungeon/ruin they know is nearby. As background you inform

learning their respective professions, that they met by chance in an inn or

dangerous environment, and that, beyond the knowledge common to the area

(speech, alignments, races, and the like), they know nothing of the world.

only minimal work describing the place and its inhabitants. Likewise, as player

characters are inexperienced, a single dungeon or ruins map will suffice to

After a few episodes of play, you and your campaign participants will be

ready for expansion of the milieu. The territory around the settlement — likely

the “home” city or town of the adventurers, other nearby habitations,

wilderness areas, and whatever else you determine is right for the area —

should be sketch-mapped, and places likely to become settings for play

actually done in detail. At this time it is probable that you will have to have a

large scale map of the whole continent or sub-continent involved, some rough

outlines of the political divisions of the place, notes on predominant terrain

features, indications of the distribution of creature types, and some plans as to

what conflicts are likely to occur. In short, you will have to create the social

and ecological parameters of a good part of a make-believe world. The more

painstakingly this is done, the more “real” this creation will become.

Eventually, as player characters develop and grow powerful, they will explore

and adventure over all of the area of the continent. When such activity

begins, you must then broaden your general map still farther so as to

encompass the whole globe. More still! You must begin to consider seriously

the makeup of your entire multiverse — space, planets and their satellites,

parallel worlds, the dimensions and planes. What is there? why? can

participants in the campaign get there? how? will they? Never fear! By the

time your campaign has grown to such a state of sophistication, you will be

ready to handle the new demands.

There is nothing wrong with using a prepared setting to start a campaign,

what you envision as the ultimate direction of your own milieu. Whatever

doesn’t match, remove from the material and substitute your own in its

place. On the other hand, there is nothing to say you are not capable of

creating your own starting place; just use whichever method is best suited to

your available time and more likely to please your players. Until you are

sure of yourself, lean upon the book. Improvisation might be fine later, but

until you are completely relaxed as the DM, don’t run the risk of trying to

“wing it” unless absolutely necessary. Set up the hamlet or village where the

action will commence with the player characters entering and interacting

with the local population. Place regular people, some “different” and

unusual types, and a few non-player characters (NPCs) in the various

dwellings and places of business. Note vital information particular to each.

Stock the goods available to the players. When they arrive, you will be

ready to take on the persona of the settlement as a whole, as well as that of

tricky, hostile, etc. as the situation demands. The players will quickly learn

who is who and what is going on — perhaps at the loss of a few coins.

Having handled this, their characters will be equipped as well as

which encourages rather than discourages players. If things are too easy, then

there is no challenge, and boredom sets in after one or two games.

Conversely, impossible difficulty and character deaths cause instant loss of

interest. Entrance to and movement through the dungeon level should be

relatively easy, with a few tricks, traps, and puzzles to make it interesting in

itself. Features such as rooms and chambers must be described with verve and

mysterious. Creatures inhabiting the place must be of strength and in numbers

not excessive compared to the adventurers’ wherewithal to deal with them.

(You may, at this point, refer to the sample dungeon level and partial

The general idea is to develop a dungeon of multiple levels, and the deeper

more deadly traps, more confusing mazes, and so forth. This same concept

applies to areas outdoors as well, with more and terrible monsters occurring

more frequently the further one goes away from civilization. Many variations on

dungeon and wilderness areas are possible. One can build an underground

complex where distance away from the entry point approximates depth, or it

can be in a mountain where adventurers work upwards. Outdoor adventures

can be in a ruined city or a town which seems normal but is under a curse, or

situation for your campaign participants.

Whatever you settle upon as a starting point, be it your own design or one of

the many modular settings which are commercially available, remember to have

some overall plan of your milieu in mind. The campaign might grow slowly, or it

might mushroom. Be prepared for either event with more adventure areas, and

the reasons for everything which exists and happens. This is not to say that total

and absolutely perfect information will be needed, but a general schema is

required. From this you can give vague hints and ambiguous answers. It is no

exaggeration to state that the fantasy world builds itself, almost as if the milieu

actually takes on a life and reality of its own. This is not to say that an occult

power takes over. It is simply that the interaction of judge and players shapes

the bare bones of the initial creation into something far larger. It becomes

fleshed out, and adventuring breathes life into a make-believe world. Similarly,

the character of states and peoples. Details of former events will become

obvious from mere outlines of the past course of things. Surprisingly, as the

bound to develop and become almost real, the nations and states and events of

and life. What this all boils down to is that once the campaign is set in motion,

you will become more of a recorder of events, while the milieu seemingly charts

When the party are leaving the sandbox edges, I find it does not normally need a hard "You can't go that way". Instead I find the best technique is to shift GMing mode from detailed (eg hex by hex) to very broad-brush.

"You spend a week out beyond the Kurmanur Wilds, but there seems little of interest here."Players don't take offence at being told a summary response to their actions. They can take offence at being told "You can't do that/go there".Shifting mode is a very important GM technique, something we all do routinely (eg exploration-combat-downtime-social). I've only ever seen Justin Alexander give it much attention, but knowing how & when to shift is a particularly powerful tool in running non-linear campaigns.
Posted by Simon at 12:16 No comments:

This is my current XP system for non-combat achievements, from getting through a difficult door to a diplomatic negotiation, finding hidden treasure, or significant exploration. It is similar to the 5e DMG suggested approach, but based off monster Challenge XP and awards are divided by Tier, not by Level. It gives increasing awards at higher levels, but advancement generally slows over time.

This uses a mix of 1e DMG, Mentzer Classic Companion Set, the 3e d20 Fields of Blood, and some ideas of my own, eg the mining survey system.

I wanted some traditional-feeling enemies for a low power 5e D&D campaign - while keeping elements of the 5e flavour. I came up with the following. 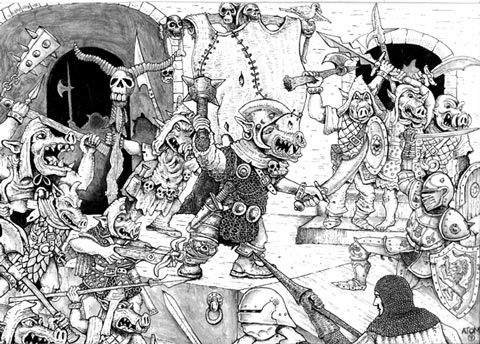 In response to a query from Melan/Gabor Lux.

The main campaign page for my Mini Six Primeval Thule game, including some house rules (like shields add to parry/block not soak) - https://simonsprimevalthule.blogspot.com/2020/01/the-valley-of-scorn-palace-of-silver.html

15 sessions in so far. I've been mostly running it online text chat recently, so there are some full session logs, eg https://simonsprimevalthule.blogspot.com/2020/07/sp15-1212215-ar-tizun-thane.html - session opens with a fight between PCs and Berbalangs and there's a spellcasting lizardman shaman PC so you can see the magic system in action. So far we've played through Palace of the Silver Princess and are now playing Halls of Tizun Thane. Dungeon crawls seem to work fantastically well in Mini Six; there's not a lot of routine attrition to track but there's always a fear that any fight could be your last, so PCs avoid unnecessary combat. I used standard starting PC attribute & skill levels (which is pretty powerful, feels like about 5th level in D&D) and the recommended advancement of 3-7 CP/session, more to the low end for online sessions, which feels like a nice rate.

One thing I learned to do different from the book; I automatically hand out a Hero Point at the end of every full session. I rarely give them in-session, though I may give bonus CP. I find this works best; HP are a nice resource to both save and spend. In this session https://simonsprimevalthule.blogspot.com/2020/06/sp14-10-1212215-ar-fall-of-saya-24-cp.html a player who'd been hoarding his HP blew all 6 on a single attack (3 on to hit, 3 on damage) - and destroyed the unkillable Night Thing.

Here's a thread I started back in February when I'd just begun the game https://www.therpgsite.com/showthread.php?41734-d6-System!-%28WEG-Star-Wars-et-al%29&highlight=Mini+Six
Posted by Simon at 10:01 No comments: